The dog and I set out on our walk, happy for a cool night. Overhead, the clouds feathered in gray and white wisps.

The weeds beside the path were a riot of texture and color in the fading light. 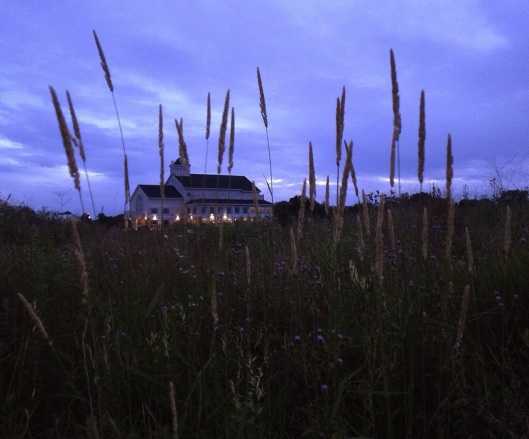 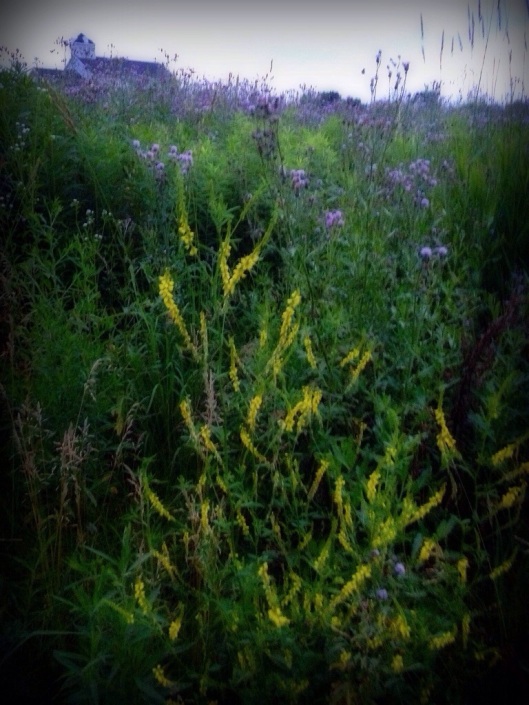 And the corn will be well beyond knee high by the Fourth of July.

A week of soaking rain has ended with a cool breezy day. I harvested the lavender and and tied it into bundles to give away. Now the scent drifts around the house and lingers on my hands.

The season’s first strawberries were picked this morning and offered up for sale at Brooklawn Farmer’s Market. It was a long cold winter we had, but some things are worth waiting for!

If I stood with my face to the wind and looked straight up at the clouds scudding across skies first blue, then gray, I would think it autumn. But the blooming redbud and unfurling dogwood blossoms say otherwise. So I fill my planters with young spring plants. Soon enough they will crowd each other and spill over the edge, in the sweltering heat. 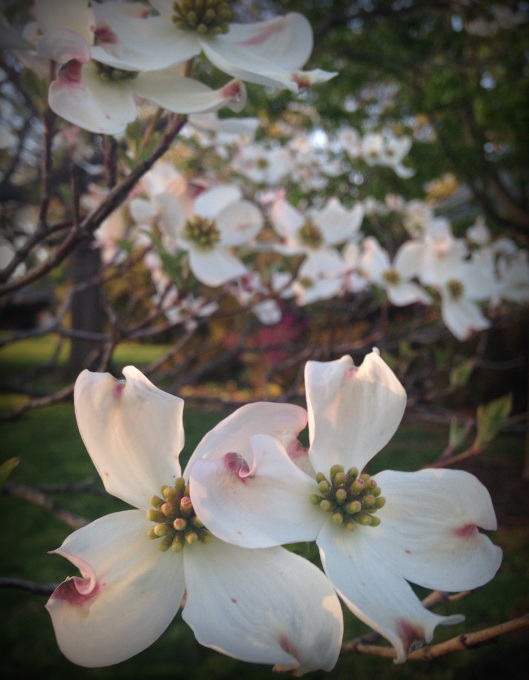 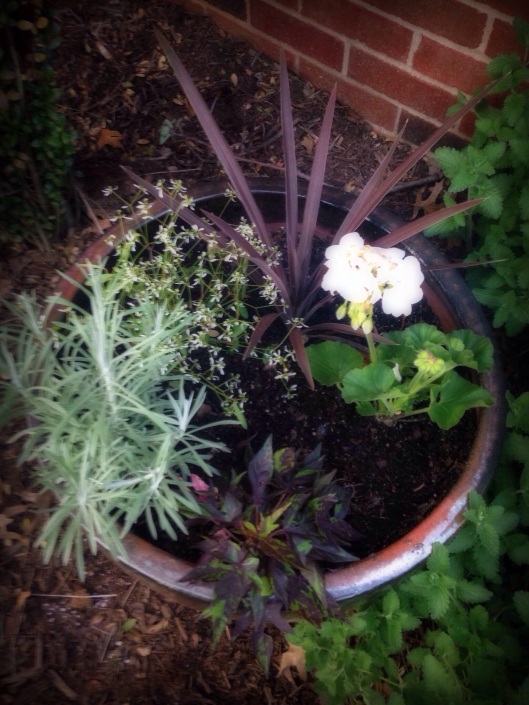 This day began with me donning gloves and cleaning the bathroom at work after a young boy spent some time in there, but failed to use the toilet –for any of his needs. Enough said. My next work debacle included several hours spent gathering data on a spreadsheet to supply to our auditors, only to lose the document in the bowels of the computer, never to be seen again. Such is the life of a non-profit executive. Glamorous, it is not.

But speaking of glamour, and on a much happier note, it’s Flowers In The House over at Jane’s. So I headed out to my fading yard after dark, to see what I could collect for an early autumn bouquet to bring to the party. I tucked some sedum, dogwood leaves, caladium and red fountain grass fronds into a tall marbly vase that was a wedding gift. 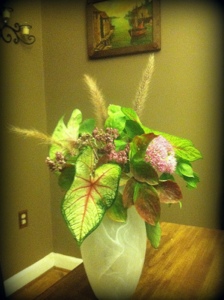 Felix the Cat stopped by to take a sniff.

More sedum, hydrangea, lavender stalks, a few stragglers from the asters, and some wintercreeper clippings went into a pottery vase that I rescued many years ago from a discard pile outside the ceramics lab at college. I rather like the scorch marks. 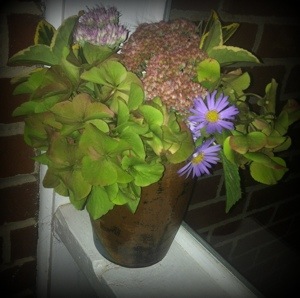 Pirate rather likes the flowers!

Be sure to stop on over to Jane’s at SmallButCharming and check out the lovely flowers from around the world!

The sedum waits until the edge of summer teeters into fall
before showing off its blossoms. 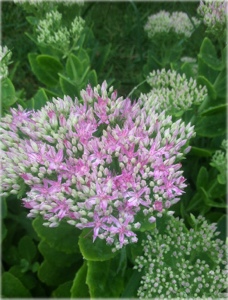 Fog on the river, and a hint of color on the dogwoods, always the first to change. Even the 90 degree weather has a cool edge today, suggesting that it won’t be stopping long. 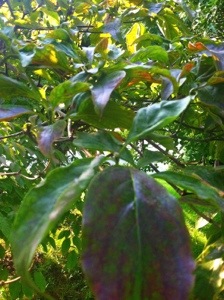 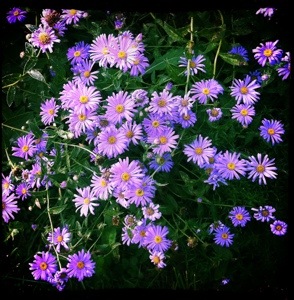 Tonight I spotted, through the weeds and overgrown bushes in my poor neglected flowerbeds, a flash of hot pink. Thinking I had planted an heirloom hibiscus, I wandered into the bed to check out why the leaves appeared to be turning red. I discovered that, in fact, I had brought home from an herb faire a purple monarda bee balm when it was just an unrecognizable shoot of a thing. And now it’s showing off! I need to find a stake for it, but I hope it in fact does attract hummingbirds, as promised. 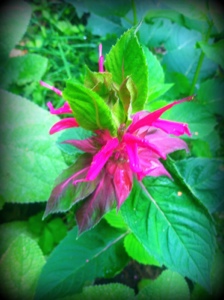 The other discovery of the day were these delightful, voluptuous donut peaches, so-called because of their flat, round shape and almost-hole in the middle. They are deliciously sweet! Upon further research I discovered that they are also called Saturn peaches. I rather like that name. Either way, they make a lovely dessert.

Every day another thunderstorm, never drying off enough to cut the grass and deadhead flowers.   The house is engulfed in green and blooms.

The yucca finally blossomed fully, gorgeous and white against the lush green of gayfeather and hibiscus.

Rain is forecast into the foreseeable future. But I’m grateful for greenery; saddened by news from the west of roaring fires and parched earth and 19 brave lives lost. One more reminder to live life with a grateful heart, never knowing what may come.

I’m enjoying a rare day off, right in the middle of the week, and it gives me a chance to join Jane’s Flowers In the House party. I’m definitely late to the party, but this is what vacation days are for, and it seems too fun not to join in.
We inherited a bedraggled hydrangea when we moved in 8 years ago. I love the way the blooms fade like watercolors from blue to pink. By summer’s end they’ll be green. I tucked in a woodland fern that grows in the same bed. 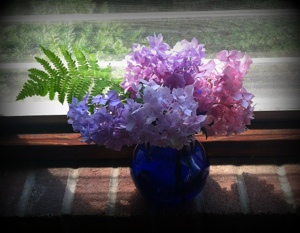 The first coneflower of the year has bloomed. I added smoke bush, a few spikes of salvia and a coral bell bloom.I love the antique pitcher, passed to me from my mom. 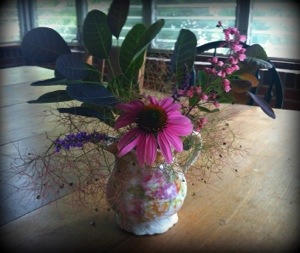 I have a fascination with miniature things, and had fun collecting bits of geranium, carnation, spirea, lavender, gypsophila and euphorbia to fill my itty bitty vases. 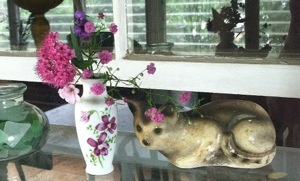 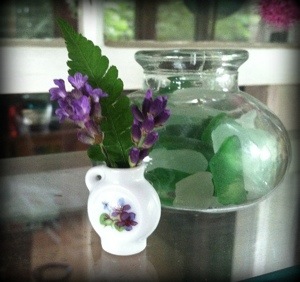 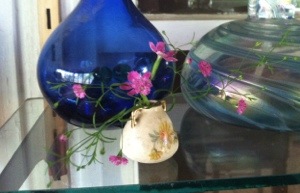 Bees are part of our tribe! We need them for food, beauty, poetry, and soul wisdom. We are dedicated to education, advocacy and protecting all things pollinators.

Holding the Bowl of the Heart

~ Art, cats, nature, animals, weather, and whatever. Painter at heart ~

Top 10 of Anything and Everything - The Fun Top Ten Blog

Poetry that purrs. It's reowr because the cat said so.

be the love you wish to see!

My Food And Flowers

Two of the Great Joys in Life!

Views From A Small Island

A photographic record of the everyday and the not so everyday life around the UK.